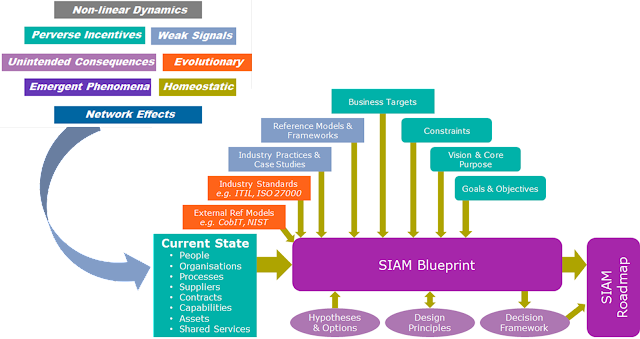 As such, a SIAM capability could almost define the Wikipedia entry for a Complex Adaptive System. Any change to the system will set off a chain of events as the component parts of the system react to the initial change.  This adaptive nature creates particular challenges to designing and establishing a SIAM capability, as many of the outcomes from a change are unpredictable, and could include unintended consequences, emergent phenomena and perverse incentives.
Fortunately, much progress has been made over the last thirty years in defining how best to deal with Complex Adaptive systems and these techniques must now be harnessed and applied to the SIAM domain.
The most successful interventions take a whole system approach and avoid overly engineered up-front design and simplistic, reductive thinking.
In order to enable an effective SIAM operating as a complex adaptive system, organisations should:


Posted by Andy Savvides at 06:40 No comments:
Email ThisBlogThis!Share to TwitterShare to FacebookShare to Pinterest

I have been leading the Atos Consulting team at LBE who have been acting as trusted advisors to the Head of IT and the Programme Board, providing design advice, guidance and transition assurance.

The project team, with support and guidance from the SIAM practice in Atos Consulting, have established a new in house Service Desk as part of a Hybrid SIAM at LBE.

In just 6 weeks we launched the new Service Desk at LBE which went exceptionally smoothly and is now fully operational as the single point of contact for all of Enfield’s 4000 users, enabling them to log incidents, make service requests and get self-help via a new on-line portal.

The LBE transition team advised by Atos Consulting have:
Fantastic team work and Atos are very proud to be a trusted partner at London Borough of Enfield.

Andy Savvides
I lead the Platforms and Service Transformation practice for Atos Consulting across UK&I. I am responsible for Service Integration and Management (SIAM) and Hybrid-IT advisory services and act as delivery Director and Subject Matter Expert for clients in this area.